Doing good hair doesn’t mean forsaking a good design aesthetic. Salon owners are taking the reins in creating their dream spaces because they believe in the importance of creating a respite from the outside world for their clients to feel–and look–the best. Here are four new New York City salons that are getting it right.

Suite Reyad at The Pierre 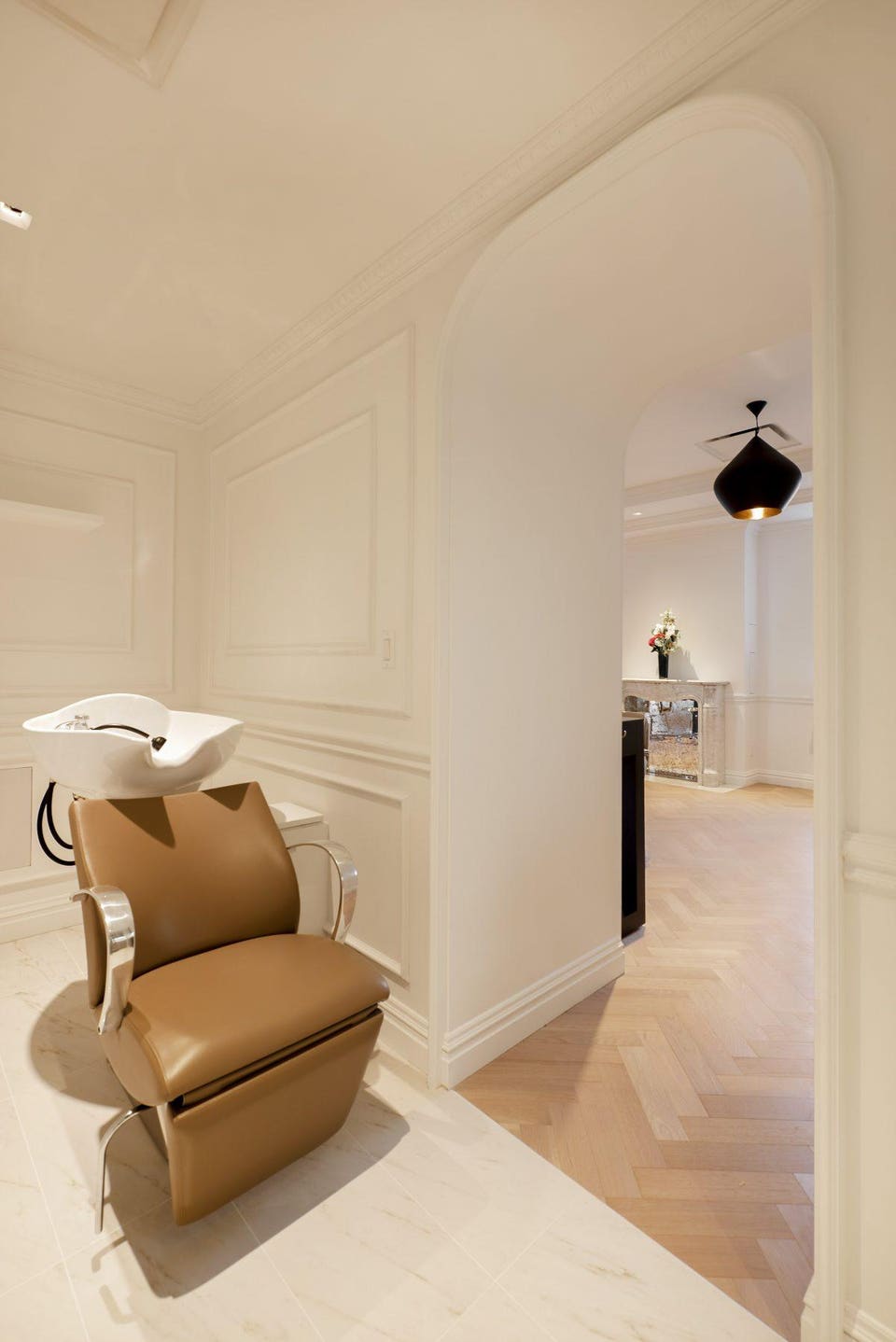 Whitewashed walls, champagne herringbone wood floors, velvet sofas, Tom Dixon light fixtures and a carved marble fireplace make this cozy, jewel box of a space at the Pierre Hotel in Midtown just what French colorist Reyad Fritas wanted for his first salon. Fritas, who’s known for his meticulously applied balayage highlights, has colored the hair of Harper’s Bazaar‘s Style Director Joanna Hillman, Elle editor in chief Nina Garcia and fashion designer Rebecca Hessel Cohen at his new space Suite Reyad. Over the course of many months after finding this hotel suite-like space, Fritas worked with interior designer Eric Cohler and his architect to create the interiors. “Everyone wants comfort, but most importantly clients like intimacy,” explains Fritas. “Especially when you spend a few hours having your hair done.” Fritas, who worked for many big salons in the past, wanted to move away from the stark, anonymous salons of yore with many chairs and too many people buzzing around. “I got inspired by the idea of a Parisian apartment where I could welcome clients as if it was my own place. And I wanted a place that is very bright, clean and chic but not too modern.” So far all of his customers, even the new ones, have already felt at home.

David Mallett at The Webster 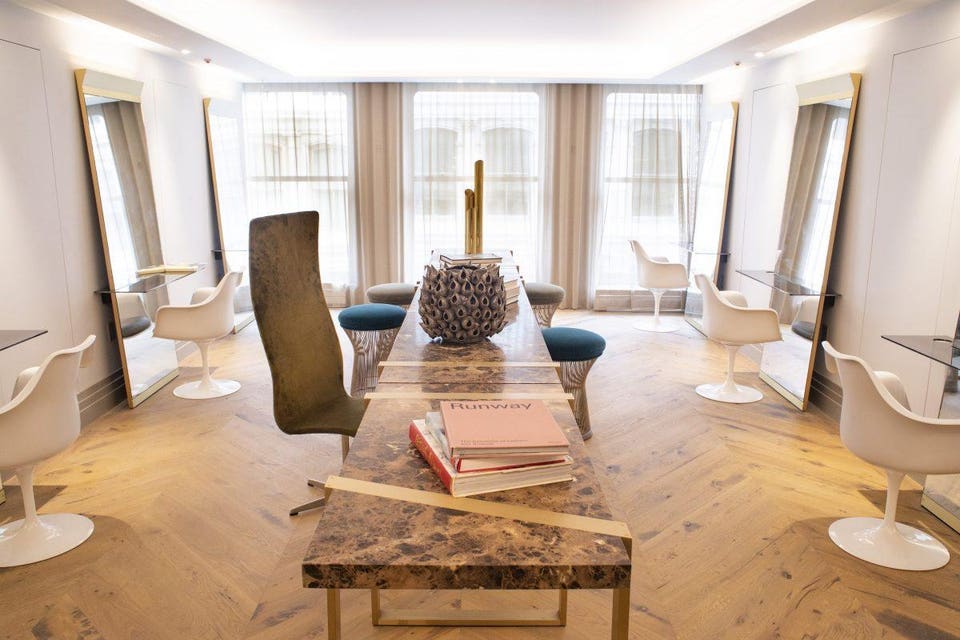 For his first salon stateside (he has two salons in Paris), the Australian hair guru David Mallett, who’s tended to the tresses of notables like Carla Bruni, Charlotte Gainsbourg, Natalie Portman and Diane Kruger, has landed at luxury multi-brand boutique The Webster in SoHo. The intimate and discrete space allows the hairstylist and his French team to tend to their New York City-based clients locally. The 1,600-square-foot space on the fifth floor, designed by French architect Charles Zana, features eight chairs and old world architectural details a plenty. “My friend and client Laure Hériard Debreuil, founder of The Webster, invited me to tour her new store’s space in 2017 and I fell in love with the building,” Mallett says. So he signed on the dotted line and set out to renovate the bare space to his specifications. “My salon in Paris looks like my apartment in Paris so I wanted the New York salon to look like what my New York apartment would look like: a melting pot of French and American cultures,” says Mallett. To this end, the salon features custom-designed lighting and furniture from fifth generation metalworker Francois Pouenat, Eero Saarinen’s tulip chairs for Knoll, 17th-century imported parquet floors and luxe Dedar curtains to add warmth and privacy. “Even at our larger salon on Rue Notre Dame des Victoires, we find moments for creating intimacy between the stylist and their client which leads to quality and trust,” says Mallett. 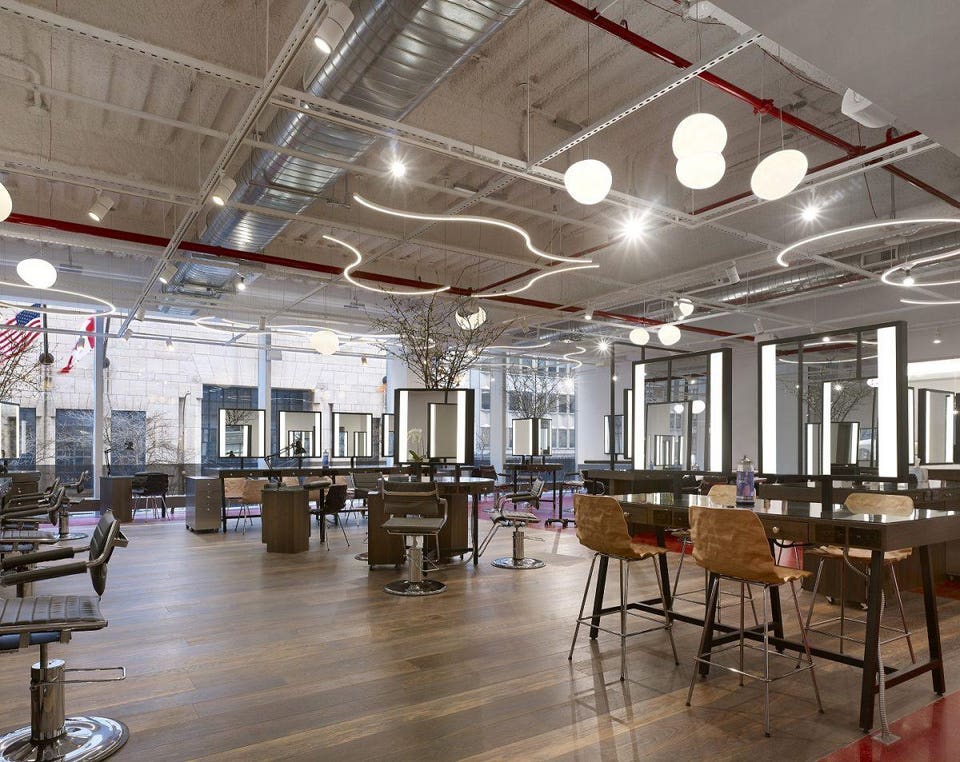 John Barrett, whose eponymous salon was located at Bergdorf Goodman for two decades, has opened up a new salon nearby in Midtown but this time in his own curated space. Boasting a ton of natural light, the new 6,500-square-foot loft-like space features 15-foot ceilings, custom red terrazzo and wide oak plank floors, custom mobiles and hanging lights and floor-to-ceiling bookcases. The reception area boasts an olive green Olof Ottelin sofa and chairs and Alvar Aalto stools and a rotating collection of art will be on view. “I wanted my clients to feel that although we had changed locations, we hadn’t necessarily changed the John Barrett DNA,” says Barrett. “It’s downtown energy meets uptown class, just like the people who visit me.” Barrett, who’s worked with clients like Hillary Clinton, the Olsen Twins and Vanessa Redgrave over his illustrious career, wanted to oversee the upscale, industrial interiors of the open plan space himself. “The design was inspired by years of dreaming, years of wondering what I could do next. It was totally blank here, totally vacant, and I had the special power to interject my own opinion of Manhattan,” Barrett says. When he told clients, he was relocating, they all requested a homey and relaxed yet luxurious and cheerful salon. “They all want an experience. That was my goal here to create a moment that one doesn’t necessarily forget and our clients have never been happier.”

Benjamin Salon at The Dream Downtown 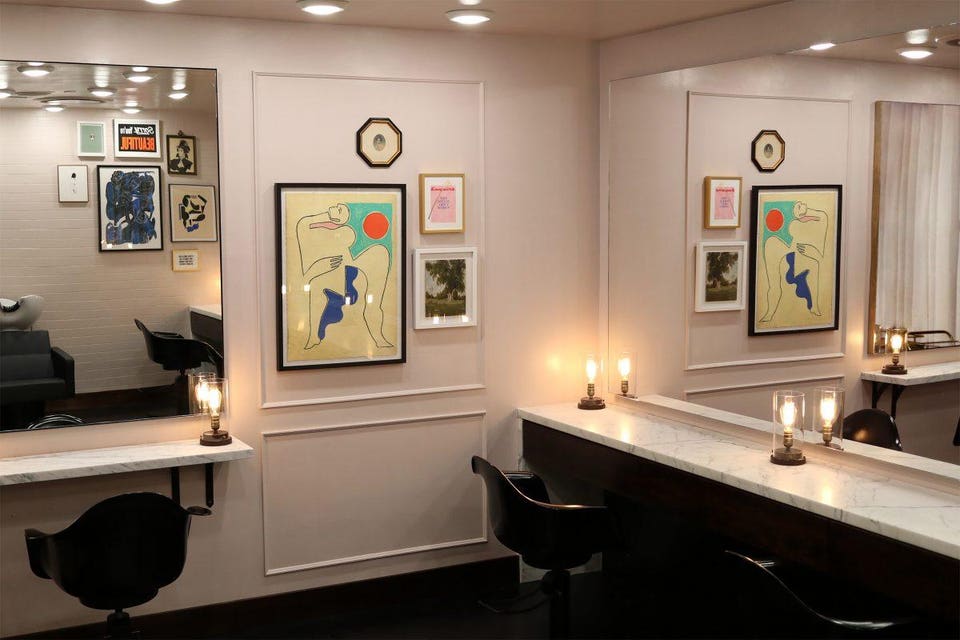 For his first east coast outpost of Benjamin Salon, British-born stylist Benjamin Mohapi chose the Dream Downtown Hotel in Chelsea. British-born Mohapi, who’s styled the likes of Meghan Trainor and Robin Thicke, was excited by the intimate size and scale of the space. “Having been back and forth with the New York pop-up for the past four years, we felt it was time to put down permanent roots here,” he explains of the five chair salon. He was also excited to take on the project’s design himself. “I always know how I want it to look so it’s easier to cut out the middle man,” he says. “We wanted it to feel like a home and a comfortable place to hang out. So there is a lot of art on the walls, books on the shelves and flowers.” Dusty pink walls and ceilings contrasted by black furniture have created a grounded, soft, almost “womb-like” space. “For us the space is all about allowing the people in it to be themselves. So the design needs to be welcoming rather than overpowering.”
355 West 16 Street; benjaminsalon.com

With more people working from home to avoid coronavirus, will the internet break? The short answer is probably not. The longer answer is that there will be disruptions. To protect workers …